Ad Stacking occurs when a fraudster layers or stacks multiple ads on top of one another so that only the top ad is visible to the user. When the user clicks the ad, they unknowingly click all the ads underneath the intended ad. Like Click Spamming, when the click's fingerprint resembles that of an install, the install is credited to the partner that sent the fraudulent click.

Indicator: Multiple clicks registered from the same user at the same time

Unlike Click Spam, clicks from ad stacking are from individual devices and will not present as high volumes from single end points. By monitoring the activity of each user across all of Mpire’s campaign activity, TrafficGuard can see if clicks from a single user occur on multiple campaigns within the same moment. As a tactic that has evolved from Click Spam, ad stacking can also be indicated by the flat distribution of click to install times. The ad click isn’t delivering the install, in fact, the user may not have seen the ad at all, therefore, it is unlikely many installs would occur within the expected time frame. 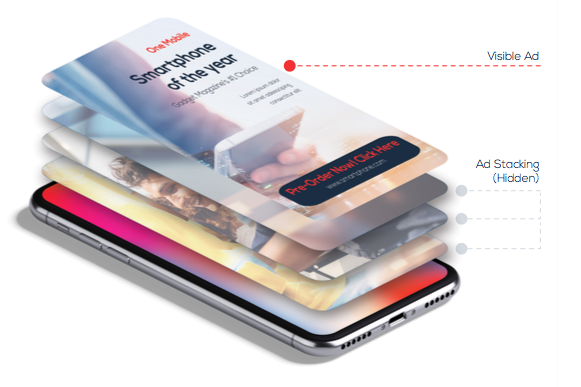